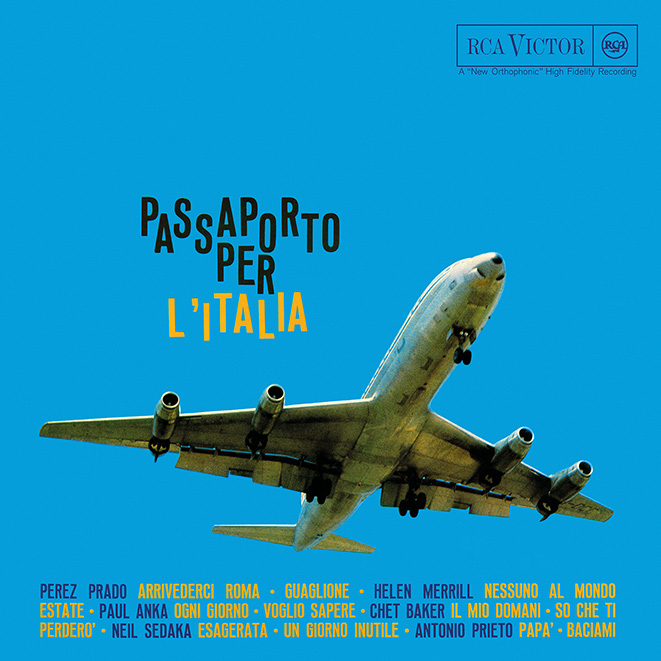 The RCA artists on this LP record have only two things in common: “Inter-conti- nental Airport Rome-Fiumicino” stamped on their passports and a great love for Italy. As a tribute to the country which gave them a friendly welcome and where they spent unforgettable vacations and reaped enthusiastic applause, all of them chose to sing songs in Italian or perfom – in the case of Perez Prado – a number of outstanding Italian hits. The dazzling trumpets and electrifying rhythms of Perez Prado, the captivating voice of Helen Merrill, rightly considered the top-notch white jazz singer by critics over the world, the young, all-time best-sellers, Paul Anka and Neil Sedaka, the fantastic trumpet of Chet Baker and his mysterious swinging style, of singing, and lastly Antonio Prieto, the Latin- American singer-songwriter who wrote “LA NOVIA”, are the guest stars of this “PASSPORT TO ITALY”, which, more than a record, is a full-fledged musical show, with a vast assortment of voices, of musical styles and songs.

The Italian pronunciation of these North and South American recording artists is virtually perfect and particularly praiseworthy, if for no other reason than for the effort they have made in getting around, in just a few days, the difficult twists and turns of the Italian language. Their accent is naturally somewhat exotic but it only adds to the charm and the originality of the interpretations. The “show” opens with the already classic “ARRIVEDERCI ROMA”, which, though turned into an overpowering “chunga” by Perez Prado, has kept all its original melody intact. Prado, the wizard of Latin-American dance music, is an extremely refined blender of sounds and rhythms, and without any difficulty can take even a Neapolitan song, change it into a mambo and adapt it to his orchestra. In “GUAGLIONE”, for example, the “corruption” comes off perfectly and testifies to the everfresh inventiveness and the unmistakable personality of the Cuban-born pianist arranger.

Helen Merrill prefers quality over quantity and so has made very few records but they already oc- cupy a place of their own in the annals of jazz. She consented to record two popular ballads only because Armando Trovajoli, the most qualified exponent of Italian jazz as well as a far-out moder- nist, was to conduct the orchestra. Furthermore, the two songs, “NESSUNO AL MONDO” and “ESTATE” are particularly congenial to her musical temperament, for she is most of all concerned with creating subtle and seductive moods, making an intelligent use of her vocal resources in that she tries to “add” her voice to the orchestra as though it were another instrument.

Canadian-born Paul Anka, by now a regular member of the exclusive club of top-selling vocal artists of America, presents one of his own songs, “OGNI GIORNO” originally entitled “LOVE ME WARM AND TENDER”, the most requested hit in his present-day repertoire. And the young singing star’s interpretation of “VOGLIO SAPERE” (“I’D LIKE TO KNOW”) once again makes clear why his name become a permanent fixture as all-time best-seller.

Neil Sedaka is another representative of the younger generation of American singers. When he was still in high school in Brooklyn, Neil became a close friend of one of schoolmates: Howard Greenfield. The two of them wrote numerous songs together for school shows: Neil handled the music and Howard the words. Their collaboration proved extremely fruitful, and they were soon to make their debut as professional songwriters with two hits of the calibre of “STUPID CUPID” and “FALLING”. The Sedaka-Greenfield team, which in only a few years time has become one of the best-known, pre- sents, in Italian, two songs which in their original tongue have already climbed to the top: “ESA- GERATA” (“LITTLE DEVIL”), translated by Leo Chiosso, and “UN GIORNO INUTILE” (“I MUST BE DREAMING”), translated by Gentile and De Simoni.

After Sedaka comes one of the big names of cool jazz: Chet Baker: Trumpet-player and singer, he proves here for the nth time that the names “Golden Trumpet” and “Angel Voice”, given him not only by his fans but by the crites as well, are in no way exaggerated.

With an at once restless, desperate and almost possessed musical style, Chet sings and plays two songs which he himself wrote: “IL MIO DOMANI” and “SO CHE TI PERDERO”. His reserved, curiously, precarious and profoundly dramatic way of singing, virtually the mirror-image of his life, is the same in both songs and makes them seem almost unconsciously autobiographical.

The “show” then closes with Antonio Prieto. Precisely because of his Latin origins (he was born in Chile, but is Argentine by adoption), it is perhaps easier for him than for the others to express himself in Italian. As is well-known, the name of Prieto soared to the Olympic heights of popular music with “LA NOVIA” whi- ch he wrote in collaboration with his brother, Joaquin. He is a typically Latin singer with a warm, melo- dious and romantic voice, tinged with melancoly, and on more than one occasion he has shown that he tho- roughly understands the tastes of the public. Listen to his two most recent compositions: “PAPÀ”, written in collaboration with singer-songwriter Sergio Endrigo, the autor of “ARIE DI NEVE”, and “BACIAMI” and… judge for yourselves.