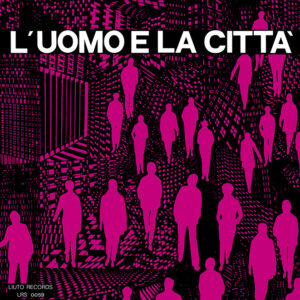 In the intricate panorama of Italian library music, the themes of city, factories, metropolis, work, urbanization and technology have always been among the most fascinating (and used), relying on dozens of fundamental records by composers such as Alessandro Alessandroni, Farlocco, Gerardo Iacoucci, A.R. Luciani, Narassa and many others. The attempt to provide a plausible soundtrack to a continuously and rapidly ever-changing world, especially in the hectic seventies, has often produced masterpieces that combined avant-garde techniques with sounds, risky experimentation with easy-listening songs, the traffic chaos and assembly lines with the silence of the night, the end of the work shift with Sunday’s rest.

Piero Umiliani’s L’Uomo e la Città perfectly fits into this rich and varied field, an album where our Man is accompanied by a jazz musicians sublime parade that includes celebrities like Bruno Tommaso, Oscar Valdambrini, Dino Piana and Nino Rapicavoli, here delivering the most of a sound that is highly based on the richness of the wind instruments and on the rhythm of the Umiliani-led ensemble. L’Uomo e la Città is a less risky effort when compared to other releases by Piero Umiliani, but that’s in favor of an extraordinary jazz tightness (Rete Urbana, Quartieri Alti, Città Frenetica), but the wish to amaze appears when least expected in the two excellent renditions of Centrale Termica and Suoni della Città, among the best tracks of the album.