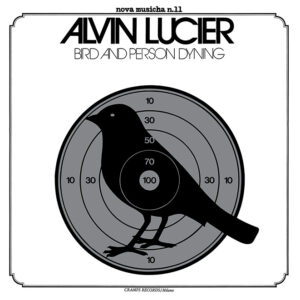 Alvin Lucier was born on 14 May 1931 in Nashua, New Hampshire. He studied music with Howard Boatwright, David Kraehenbuhel and Quincy Porter in Yale and with Arthur Berger and Harold Shapero in Brandeis. Later, after receiving a scholarship, he worked for two years in Rome. In 1962 he was appointed director of the Choral Union and Chamber Choir at Brandeis University, which under his direction devoted much of its time to the performance of new music. Since 1970 he has directed the Electronic and Computer Music Studios at Wesleyan University. He also taught music courses and played live in both the United States and Europe. In 1966 he founded the Sonic Art Union together with composer-performers Robert Ashley, David Behrman and Gordon Mumma. He has composed several film scores and theatre music. Since 1973 he has been Music Director of the Viola Farber Dance Company.
Lucier’s works very often refer to natural environments by employing electronic technology. Among his recent works, the best known are: Music for solo Performer (1965), amplified brain waves used to make percussion instruments resonate; Chambers (1968), which moves large and small resonant environments; Quasimodo the Great Lover (1970), sounds transmitted over long distances; Gentle Fire (1971), transformation of environmental sonic events by electronic means; The Queen of the South (1972), images production via the sounds of vibrating objects; Room Simulation 1, The Bird of Bremen Flies Through the Houses of the Burghers (1972), sound environment controlled by a computer; Still and Moving Lines of Silence in Families of Hyperbolas (1973-74), about static waves and related phenomena; Outlines of Person and Things (1975), diffraction of sound waves around fixed and moving objects.

The Duke of York (1972)
“A long time ago I wanted to build a grotesque jukebox. I thought of merging three or four old jukeboxes and then recording sounds on 45s, so that you could mix the sounds together. I won’t tell you how I came up with the title The Duke of York, because it’s a pun and I prefer to keep the explanation of puns secret. It was Bob Ashley who first came up with that, although I don’t think he still recalls it.
The original idea of this work was about the power of singers and vedettes in our society and the hypothesis that their vocal personalities are present in our memory at different levels and, in addition, that all of us, living or dead, might somehow be part of a huge composite identity that is constantly changing with the birth and arrival of new people. The Duke of York is an attempt to elaborate these ideas.
A single performer chooses and determines the order of an indefinite number of whole songs, speeches, arias, selected excerpts from books, letters, poems, films, plays, TV series or any other vocal sounds, including non-human ones. The actual duration of these sounds is altered by one or more people using synthesisers or other electronic tools, basing their choices on memories or similar experiences. Once altered, for example through a filter, the example can no longer be undone, and other changes must be made to the previous examples. The effect is that of a vocal identity made of layers of separate and partial identities.
The performance of the piece can serve to strengthen personal bonds, make friends with strangers or discover links to distant relatives and past identifications. Any resulting differences between the memory of the performer (of the original vocal image) and the reproduction should be considered as discontinuities of time and space. Any involuntary sounds of the synthesiser should be understood as the performer’s attempt to create continuity or to express its inability to cope with the situation”.
The Duke of York was composed in 1971 and was performed in its current version on 19 February 1972 at the Metropolitan Museum of Modern Art in New York.

Bird and Person Dyning (1975)
for performers with microphones, amplifiers, speakers and a sound object.
One day I got an electronic bird in the mail. It was a silver ball with an electrical cord that, when connected, made a sound similar to that of a chirping bird. It was a gift from Doug Kahn, a young composer from California whom I had never met personally. He explained that it was the first piece of ‘A Dream Aviary’ or, in my case, ‘A Dream Alviary’. I kept it in the kitchen and turned it on every now and then, especially in the morning. It always cheered me up when I was feeling down, and I started thinking about how to use it in a musical work.
A few months later I read an article in «Scientific American» about how certain birds that fly at night, particularly the bunting, cross long distances by partly orienting themselves looking at the position of the stars in relation to the rotation of Earth. An almost perfect sense of time allows them to understand and compensate for the continuous change in spatial proportions, which is something very musical in my opinion, and although there is no direct link between this and the structure of the work, it served as a first impulse for me, and it is still a ghost of that impulse today.
I owned a Sennheiser binaural microphone consisting of two mini microphones which, when introduced into the ears of a dummy or a person, faithfully reproduced the sounds as heard when they were bouncing inside the head and in the ear canals. I began experimenting by moving the sounds of the bird between two speakers, listening to them through the two mini microphones inserted in my ears, as I walked slowly through the space between the two speakers. The amplified chirps moved left and right according to my movements, creating small time delays and phase-shifts in relation to the position of the motionless bird. Sometimes the microphones would resonate with the loudspeakers, thus generating a Larsen feedback, and I could control the timbre and volume with small head movements. In certain positions the combination of the chirps and the Larsen effect produced phantom chirps, sometimes exact reproductions, above and below the original ones. Given the realistic properties of the binaural system, such phantoms could be heard coming from various points of the acoustic space, often inside or around the listener’s head.
A performance of Bird and Person Dyning is a live exploration of these phenomena. The title is meant as an exact description of the activity. 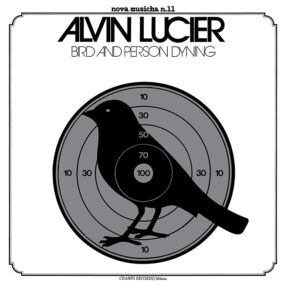